Life-transforming work with the most vulnerable youth, creating peaceful leaders.

Lead-Up International’s goal is to reduce violence by creating peaceful leaders through workshops with horses. The participants, aged 15 to 21, are welcomed into a compassionate and non-judgmental environment, far removed from the violence, abuse, addiction and neglect they often experience at home.

The Lead-Up® program is based around workshops with horses in which participants are introduced to humane ways of handling and interacting with horses. Participants discover non-violence and non-aggression for themselves through interactions with horses and principally through the experience of Join-Up® with a horse, the non-violent training system designed by Monty Roberts, world-renowned horseman and author of The Man Who Listens to Horses.

Convinced there must be a more humane and effective system to train horses, Monty Roberts created Join-Up®, a consistent set of principles based on the horse’s inherent body language and herd-behaviour. The result of Join-Up® is a willing partnership based on mutual respect and trust.

“The Lead-Up Program helps participants learn how to improve their self-awareness and regulate their body language and emotions through specialized interactions with horses, and specifically through the embodied experience of Join-Up. Participants intrinsically learn that violence is not necessary and that they can be powerful yet peaceful leaders through self-awareness and better control of body language and emotions,” says Katie Pokorny, Founder of Lead-Up International, lifelong horsewoman and promoter of equine and human welfare.

Learn more about Lead-Up’s story below or use the links for quick section-access.

Katie Cunningham Pokorny, founder of Lead-Up International, is a life long equine enthusiast, advocate for human and animal welfare and of non-violence. Katie grew up in the UK and studied at St. Mary’s Shaftesbury and London Guildhall University. In 1999, she travelled to Guatemala on holiday where she was offered work with horses. She now lives in Antigua, Guatemala with her husband and children where they own La Ronda Equestrian Center, birthplace of Lead-Up International.

Katie began training with Monty Roberts in 2006 and is at the internship level of her preparation to become a Monty Roberts instructor. In 2008, Katie and her team brought Monty to Guatemala, organizing a demonstration and media coverage to spread the message of non-violence towards horses and humans.

In 2012, Katie was awarded a certificate by Her Majesty Queen Elizabeth II for her efforts to reduce violence in the training of horses in Guatemala. Queen Elizabeth (Patron of Join-Up International) believes that these concepts can change lives. She is following the development of this program due to her interest in the humane treatment of animals and trust-based relationships with humans.

This recognition inspired Katie to develop a Join-Up® inspired program in collaboration with the Brooke partner program ‘Equinos Sanos Para El Pueblo’ (Healthy Horses for the People) that would further reduce violence towards horses and humans by helping to shift deep-rooted attitudes and behaviors. 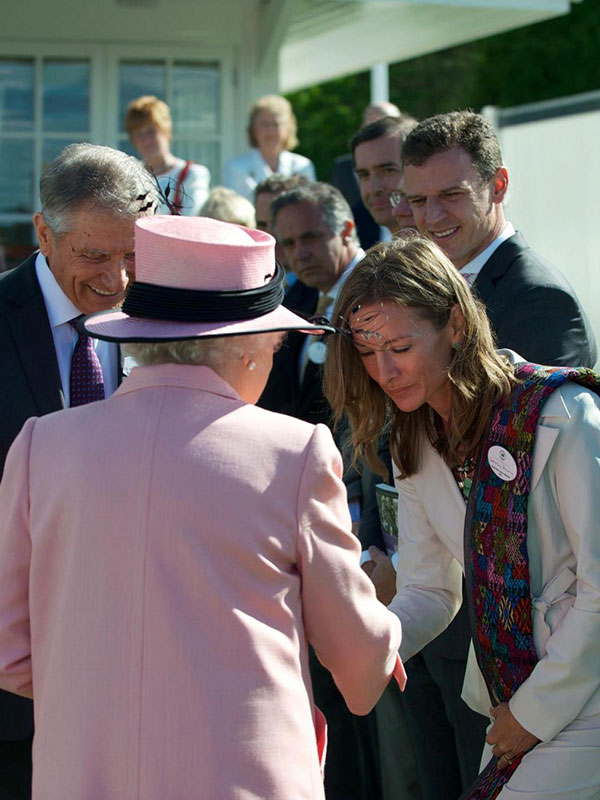 Lead-Up got its start in Guatemala. Violence is endemic throughout all levels of Guatemala – within families, within communities, and as a tool for obtaining and maintaining power in business, politics and civil society. Violence jeopardizes the country’s efforts and capacities to become a truly democratic country based on the rule of law where business and politics decision-making is transparent and accountable and human rights and civil society spaces are fully protected.

The most perilous risk for children in Guatemala is exposure to violence, either as a victim or perpetrator. (United Nations Children’s Fund, UNICEF, 2012) (Gibbons, Cunningham, Paiz, Poelker, & Montufar Cardenas, 2015, p.37)

Attempts by the Guatemalan government and by USAID to reduce violence in Guatemala have been to a large extent unsuccessful. (Office of Inspector General, U.S. Agency for International Development, 2014; United States Department of State, 2013) (Gibbons, et al., 2015, p. 37-38)

Lead-Up International was officially launched worldwide at the Monty Roberts International Learning Center in Solvang, California, in February 2017. The organization’s goal is to see this hugely successful program launched in every country in the world with a Monty Roberts Instructor, and to significantly reduce violence in youth throughout the world.

The purpose of Lead-Up International is to reduce violence in the community by creating peaceful leaders – men and women – utilizing equine-assisted therapy and non-verbal communication. We teach vulnerable youth about the power of non-violence, trust-based relationships and peaceful leadership.

Human Animal Interaction Bulletin published a study in 2015 (“Before, he fought every day with the horse and with me”: Reducing Violence in a Guatemalan Community through a Horse-Handling Program, 2015, Vol. 3, No. 2, 37-55) by Dr. Judith Gibbons, Katie Cunningham, Leslie Paiz, Katelyn E. Poelker and Marco Antonio Montufar Cardenas with scientific evidence of reduced violence and abuse toward horses and people because of the Lead-Up program.

Another study, published in 2016 shows evidence of effectiveness in reducing aggressive behavior. Lead-Up successfully fostered empowered leadership among at-risk youth in Guatemala. The program can provide tools for youth to address the many problems that they face. Those tools may not only promote success for the individual participants, but also for their family members, classmates, and Guatemalan society at large. (‘Now, he will be the leader of the house’: An equine intervention with at-risk Guatemalan youth’. Gibbons, Cunningham, Paiz, Poelker, Chajón, 2016).

The full study can be accessed at www.tandfonline.com. 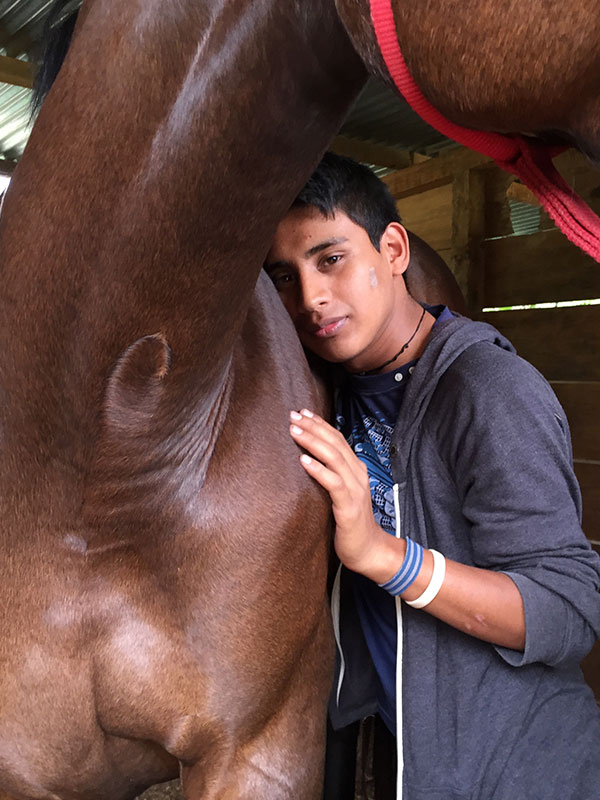 Why Lead-Up is Necessary

According to the World Health Organization, an estimated 200,000 homicides occur each year worldwide among youth and young adults aged 10-29 years, making homicide the fourth leading cause of death in this age group.

Eighty three percent of homicide victims in this age group are male, and nearly all of these deaths occur in low-income and middle-income countries. For each young person killed, many more sustain injuries requiring hospital treatment.

Beyond deaths and injuries, youth violence can lead to mental health problems and increased health-risk behaviors, such as smoking, alcohol and drug use, and unsafe sex. Youth violence results in greatly increased health, welfare and criminal justice costs; reduces productivity; decreases the value of property in areas where it occurs; and generally undermines the fabric of society. (More information and statistics can be found on the WHO’s website).

Juvenile violence and crime triple in the hour immediately after school. Every year, an average of 3,024 children die in the United States from gunfire.

According to the Violence Policy Center, California has been battling gun violence for decades and youth violence in particular.

Closer to home, the Santa Barbara county has seen the number of girls entering the probation system more than doubling over the last eight years. Teenage girls also currently make up the fastest growing population in the youth corrections system. 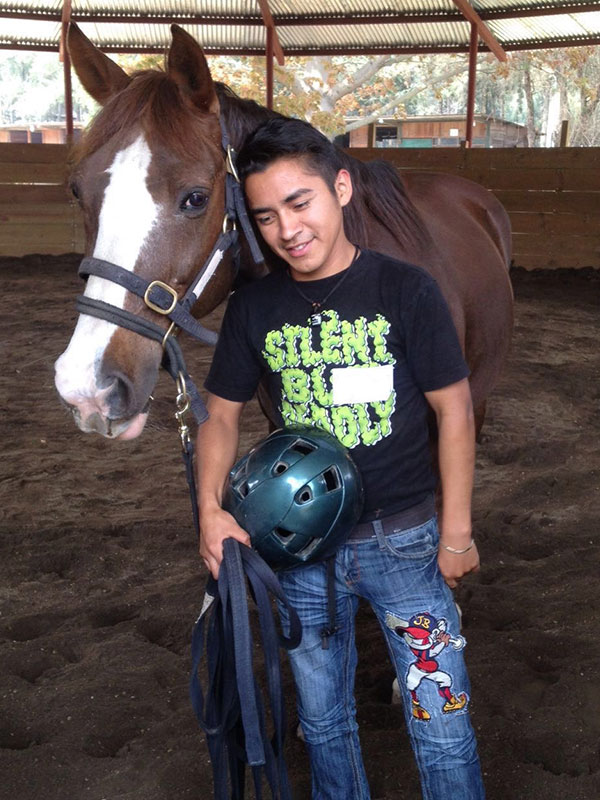 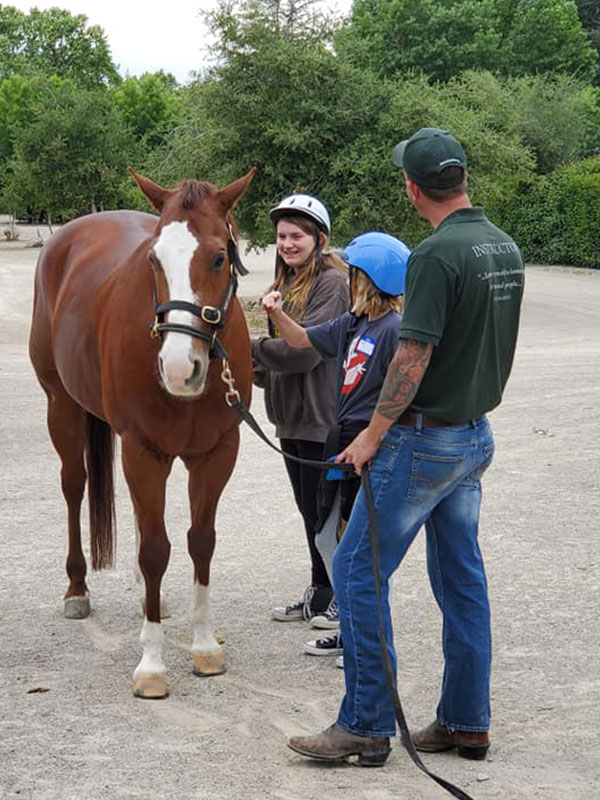 Lead-Up had its official worldwide launch at the Monty Roberts International Learning Center in Solvang, California, in February 2017, with the first 8 Lead-Up International Instructors certified to hold Lead-Up workshops across the globe.

We have grown to 14 instructors worldwide – now on every continent. And are continuing to grow to reach our goal of having Lead-Up workshops in each country with a Monty Roberts Certified Instructor.

LEARN ABOUT OUR LEAD-UP INSTRUCTORS 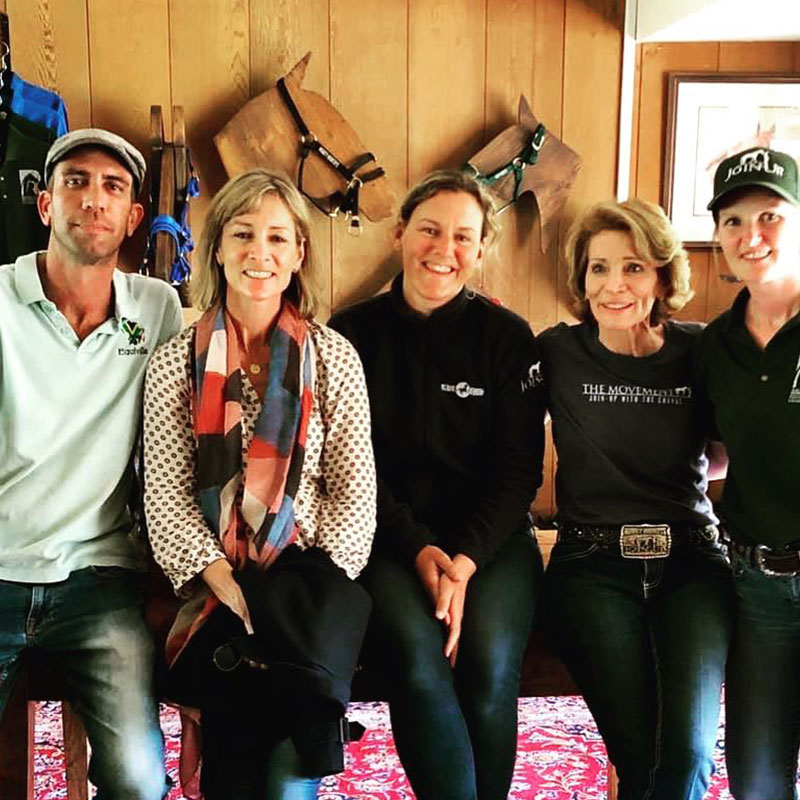 In response to national and local threats of violence at schools, and the rising rates of suicide among adolescents, Lead-Up’s California program was launched in 2017.

Join-Up International runs regular Lead-Up workshops at the Monty Roberts International Learning Center (over three half days after school) for at-risk youth from partner organizations throughout the Santa Barbara County including PAL Santa Barbara and the Buellton Rec Center.

The Monty Roberts Lead-Up Certified Instructors, assisted by child psychologist Jerry Sparby, work with youth from these centers to overcome trauma and issues related to domestic violence, child abuse, bullying, aggression, depression, gang-affiliation and other areas of their lives.

“The Lead-Up California program is life-changing. Many kids have never touched a horse. It challenges them to work in the round pen, yet builds confidence when they learn they can cause a horse to trust and understand them. They bond so strongly and identify with the flight animal,” says Debbie Loucks, Lead-Up International Board Member

“For centuries, humans have said to horses,’ you do what I tell you or I’ll hurt you.’ Humans still say that to each other, still threaten, force and intimidate. I’m convinced that my discovery with horses also has value in the workplace, in the educational and penal systems and in raising children. At heart, I’m saying no one has the right to say, “you must” to an animal, or to another human,” says Monty Roberts 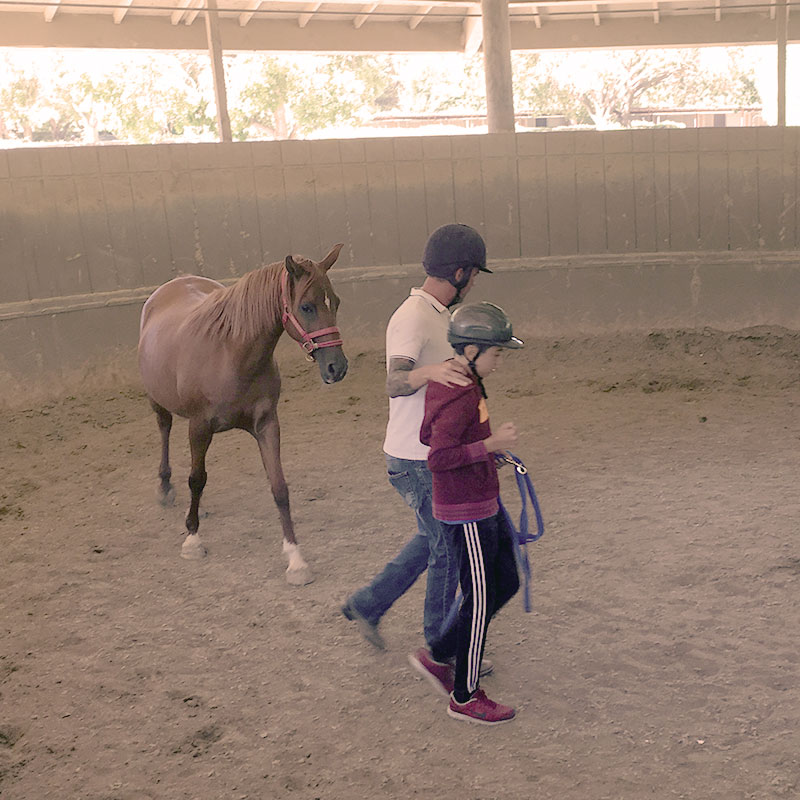 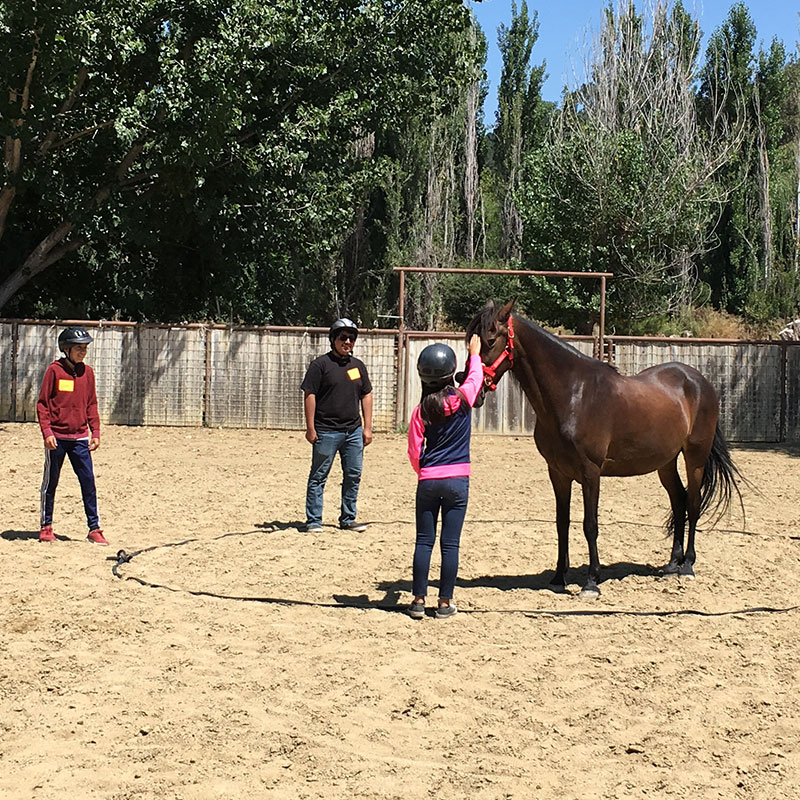 How You Can Help

The world needs peaceful leaders now, more than ever. Your donation will be used to help reduce violence by creating peaceful leaders utilizing equine-assisted therapy and non-verbal communication, community-by-community, through workshops that:

You can donate to the Lead-Up program run by Join-Up International, a registered 501(c)(3) equestrian non-profit, at the Monty Roberts International Learning Center by using the donate button below. Please contact us for further information or off-line donations. 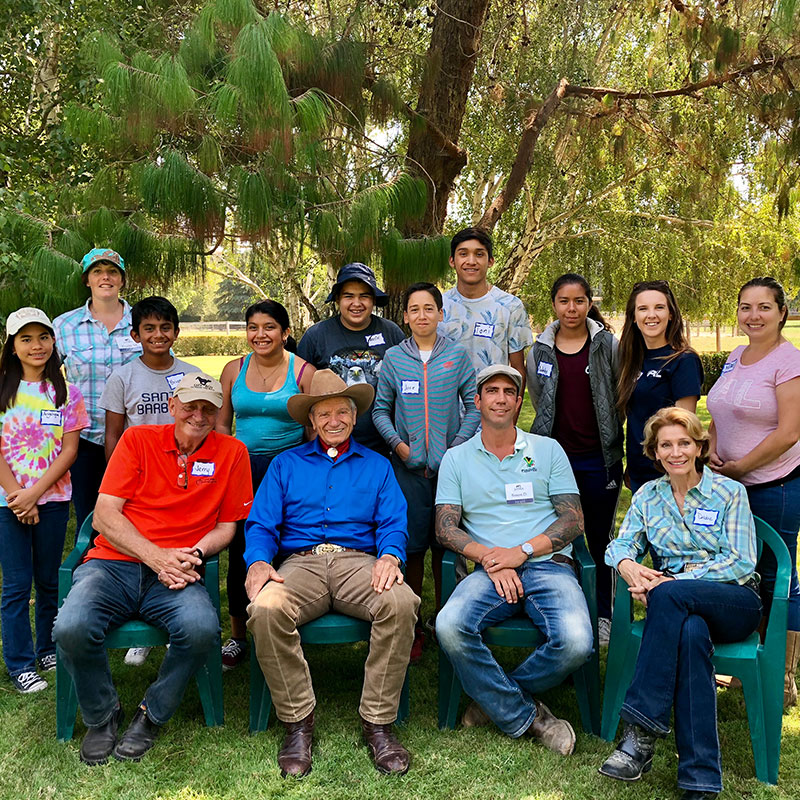 LEARN MORE ABOUT JOIN-UP INTERNATIONAL AND OUR NON-PROFIT PROGRAMS